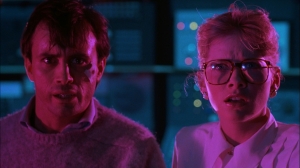 Dr. Edward Pretorius (Ted Sorel) and Dr. Crawford Tillinghast (Jeffrey Combs) are researching the effect that a resonator has on the pineal gland. They believe that stimulating the gland lets people see a reality beyond our own that is otherwise invisible to the naked eye. Crawford activates the resonator and begins to see strange creatures floating around him. When he is bitten by one of these creatures, he tells Dr. Pretorius to turn the machine off. Dr. Pretorius refuses, telling Crawford that it’s giving him a feeling like no other. 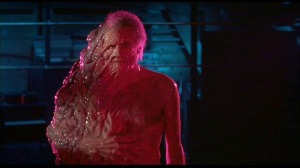 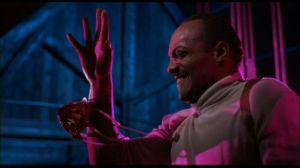 Directed by Stuart Gordon (Re-Animator), and based on a story by H.P. Lovecraft, this is one crazy film. It is packed to the rafters of gory and gloopy practical effects. The script and acting are a tad wobbly at times, but it adds to the overall charm and ‘B-Movie’ feel to the film. Jeffrey Combs is always good value for money. He always delivers a solid performance, no matter what the overall film is like. Ted Sorel plays the part of the perverse Dr. Pretorius brilliantly. His transformation into the hideous monster is great, and he delivers his lines with relish. I like Barbara Crampton, but she feels wasted here. She is mostly just a damsel in distress, but she reacts in some strange ways throughout the movie, even getting dressed up in bondage gear during one strange scene. 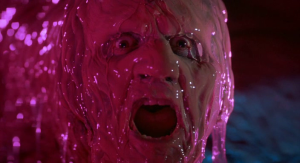 I have never read the short story that the film is based on, so how faithful it is I couldn’t really say. But as it’s Stuart Gordon and he directed another Lovecraft tale in ‘Re-Animator’ , you know it’s a pretty safe bet for some gratuitous violence and an overall tongue in cheek tone. I really enjoy this movie, however it’s not for the squeamish, so if guts and gore aren’t your bag then steer clear. For the rest of you gorehounds, dig in and enjoy. 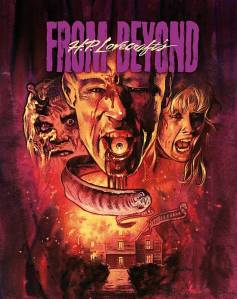