Hi guys. I’ve already reviewed this awesome movie. However I thought I’d share the trailer just to get you in the mood. Enjoy. 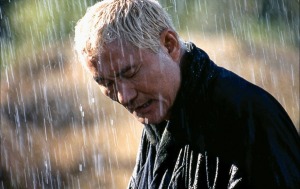 This film is up there in my top five, hell it may even be number one. Takeshi Kitano who created Takeshi’s Castle and who was a big TV comedy star, writes, directs and stars in this sublime movie. He plays Zatoichi the blind swordsman. He travels across the country posing as a masseuse, but is also an expert fighter. He shuffles along lulling would be bandits into a false sense of security, but can strike like a cobra when the occasion calls for it. 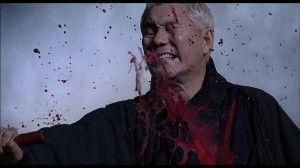 Zatoichi comes across a town which is run by two warring gangs. He meets a load of different people all with their own problems and agendas, who need Zatoichi’s help. As he goes about helping the townsfolk he becomes the focus of a mysterious gang boss who hires a ronin to kill Zatoichi, not realising what Zatoichi is capable of. The characters in the movie are just brilliant. All have their own quirks and Takeshi Kitano manages to infuse the film with humour and warmth, all while keeping the tension bubbling till the final showdown. Zatoichi finds himself unwittingly causing problems because of his keen senses and apparent calm demeanour. 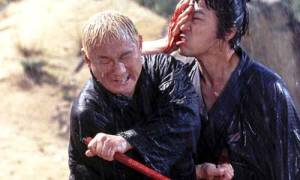 The action in the movie is simply breathtaking. Many have moaned about the CGI blood in the movie but it honestly didn’t bother me. The way Zatoichi dispatches a group of bandits with ease really has to be seen to be believed. There is so much happening in the movie, be it the little musical beats that the workers in the field work to, or the banter inside the gambling den. It is a movie that can be enjoyed time and again. 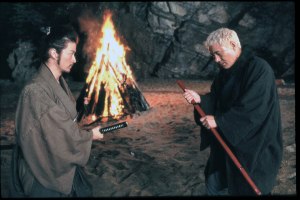 Every person I have showed the film to loves it. The final showdown is amazing and gets me giddy every time I see it, it’s just fantastic. To top it off there is a fantastic tap dancing sequence after the movie has ended. It has nothing to do with the story but it works so well, it really is just an astonishing feat in film making. You owe it to yourself to see it. 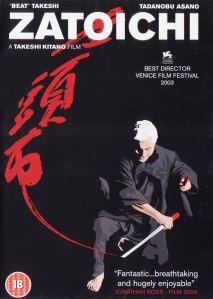