Val (Kevin Bacon) and Earl (Fred Ward) are two handy men who live in the small, quiet town of Perfection. They get by doing odd jobs, but after one nasty accident involving sewage, they decide it’s time to move on to pastures new. However something is under the ground, something large and very hungry. When people begin to disappear or are found dead, Val and Earl begin to investigate what exactly is going on. Together with seismologist Rhonda (Finn Carter), they discover that there are large, subterranean worms living underground. These large worms can detect the smallest sound and have decided to call the town of Perfection their hunting ground.

Realising that trying to escape is out of the question, the townsfolk decide to tackle these worms, or Graboids as Walter (Victor Wong) calls them. Together with local gun nut Burt (Michael Gross) and his wife Heather (Reba McIntire), Val and Earl begin to formulate a plan on distracting and dispatching the deadly threat.

This for me, is one of my all time favourite movies. It has everything. Action, comedy, horror, some excellent lines and is just an all out joy to watch. I have seen this many times since it’s release and it never gets old. The sequel (Tremors 2) was also worth watching, and I will do a review of that in due course. However I would say to steer clear of Tremors 3 & 4 as they are dire. For me this is one of Kevin Bacon’s best roles. He brings warmth and heart to a role that would have probably just been a one dimensional hick in the hands of a lesser actor. Fred Ward is also hilarious as the gruff Earl Bassett. You can see there was some great chemistry between him and Kevin Bacon as it really shines through in the film. I also loved Michael Gross as the gun obsessed Burt Gummer, however I wish he had of given up the role after Tremors 2 as he really just phones it in in the later sequels and subsequent TV series. 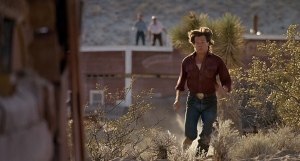 Like I said it’s one of my absolute favourite movies, and is definitely worth a watch. If you have never seen it then you owe it to yourself as a film fan to get it and watch it. It is a classic in every sense of the word and is perfect entertainment for a Saturday night with a drink and some popcorn. Seriously, get it.

For hundreds of years a dark secret has been kept in a church basement in Los Angeles. After the death of a priest who was guarding it, the key to the basement is entrusted to a priest (Donald Pleasence). He goes down to the basement and finds a large vat of green liquid. The priest hires a group of physics students let by their professor Howard Birack (Victor Wong).

With the vat of liquid is also an ancient book which has been rewritten time and again, each passage warning of the return of the Devil. Through translating the book the students find that the green liquid is the very essence of the Devil himself. The area in and around the church has also attracted some strange people and other odd occurrences. A group of homeless people led by Alice Cooper no less, have congregated outside the church, resorting to murder to make sure that nobody leaves. One by one the students are snared by the evil essence leaving a small group fighting to survive.

This is one of, if not my favourite John Carpenter films. The sense of unrelenting dread that runs throughout this movie is stifling. John Carpenter creates a mood where you know something is coming and there is noting you can do to escape it. There are a few familiar faces that tend to crop up in John Carpenter’s movies like Victor Wong, Dennis Dun, Donald Pleasence and Peter Jason. It is such a brilliant movie. I had to import the blu ray from Germany as the U.S version is region locked and no company as of yet has released it on blu ray, though I’m hoping Arrow Films give it a release as their stuff is always top notch.

There are some incredibly unsettling effects and heart pounding moments that make this such an awesome horror movie that I do find myself constantly revisiting. It’s one of the rare horror movies that is genuinely scary, which is not a moniker you can attach to some of the shit floating around now. If you haven’t seen it then definitely give it a go. If you do watch it then pop back and leave a comment, would love to hear your thoughts. 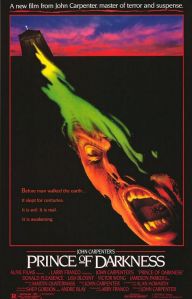