It’s the year 2127 and Dr. Paul Merchant (Bruce Ramsay) is on a mission. His mission is to undo the mistakes of his ancestors and close shut the gates of hell, which were opened when Phillip L’Merchant (also Bruce Ramsay) created that famous toy box. After the box is given to a rich aristocrat it is used to raise a demon which will control the world. However things go awry and the demon takes on the form of a peasant girl Angelique (Valentina Vargas). Phillip L’Merchant takes the box and runs. Through the centuries Pinhead (Doug Bradley) has tracked and killed the Merchant bloodline, looking for the box.

Dr. Paul Merchant is telling the marines on the space station about his mission, and what needs to be done. He tells them that for so long his bloodline have tried and failed to close the gates. Now Pinhead and his new cenobites have been unleashed in space, but all is not lost. Now Dr. Paul Merchant has Pinhead where he wants him, and the trap has been set.

This movie was plagued with problems during production. The director is listed as Alan Smithee but was actuall Kevin Yagher who worked on some of the Nightmare on Elm Street movies. The studio butchered the movie in his opinion, so he asked to be credited as Alan Smithee which is a pseudonym directors take when the don’t want to be credited with something they see as not being their vision. 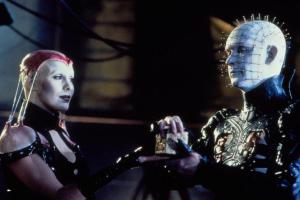 That being said, I really like this movie. Sure the script is wooden in places, but the space setting really lends itself to the Hellraiser mythos and there is some great gore. Doug Bradley is still great as the villainous Pinhead, and really delivers each line with relish. I don’t agree with all the hate this movie gets and I think if you like the Hellraiser movies and you’ve never seen it, then it’s well worth a watch. 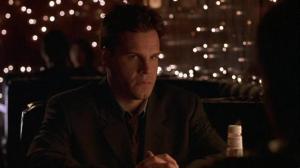 I have decided to make this my first Hellraiser review from the whole series and I’ll tell you why. This film gets a lot of shit. Even Clive Barker despises it. However I love it. The reason, or one of the reasons I love it, is because it dared to be different. Pinhead does not become the sole focus of the movie, and that’s a good thing. We’ve seen what happens when a Hellraiser movie is Pinhead-centric and the result is that fucking abomination Hellraiser III: Hell on Earth. Although I think part of the reason that movie sucked ass, was mainly down to the fact that Anthony Hickox was allowed anywhere near it. That guy is the epitome of a hack. However with Hellraiser: Inferno, Scott Derrickson did a very brave thing by putting Pinhead to the back and letting the movie be a character driven piece instead, which works very well. 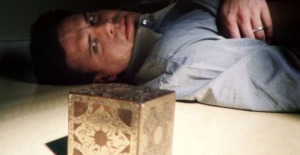 Det. Joseph Thorne (Craig Sheffer) is thrown into a world of sex and murder when he stumbles across a mysterious puzzle box at a murder scene. Det. Thorne solves the puzzle box and begins to suffer terrible and violent hallucinations, in which he is tormented by mysterious beings known as ‘Cebobites’. Det. Thorne is assigned to the case involving a mysterious killer known only as ‘The Engineer’. The Engineer tanuts Det. Thorne by leaving a childs finger at each murder. Det. Thorne realises that the child may still be alive and races against the clock to discover the identity of The Engineer before the child is killed.

However as Det. Thorne’s hallucinations become more violent, he realises that all may not be as it seems, and that The Engineer maybe someone very close to home. Living in a hell of his own making Det. Thorne must track the killer and find redemption, whatever the cost.

Yes Pinhead is left till the very last before making an appearance, but like I said before I liked that. I liked that the story was a twisted morality tale, focusing on the fact that you can’t shit on people and not expect repercussions and that karma can be indeed a bitch. Don’t listen to the shit thrown at this movie. This for me is on par with the first two entries in the Hellraiser saga. Dig in and enjoy!