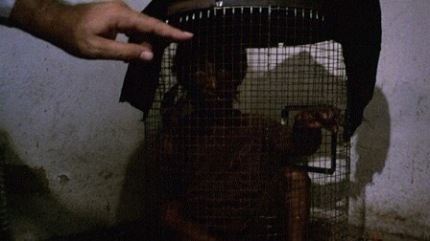 When a pretty model is found dead on an island, her body mutilated, an investigation begins in to just what happened. The deceased model’s sister arrives with a mystery novel writer (David Warbeck), to try and figure out what was the cause of her sisters murder. The duo discover that the explanation is far more bizarre than they ever could have realised.

A scientist has created a rat/monkey hybrid, for reasons unknown, though he does mention a Nobel peace prize at one point. The hybrid played by Nelson de la Rosa (The Island of Dr. Moreau), has developed murderous tendencies and decides he doesn’t like being caged up anymore.

This movie is straight up trash and I loved it. I’ve always had a soft spot for David Warbeck as he’s always given 100% no matter what the role or how strange the movie is. He kind of downplays it a tad here, but he’s still the sort of hero he played in The Beyond. The plot dithers about and feels patchy and incoherent in places, but I feel it adds to the charm. I mean when the tag line reads ‘He’s the critter from the shitter’ I think it’s safe to say you know what sort of movie you’re getting.

Nelson de la Rosa seems to enjoy his role as the carnivorous Rat Man, particularly as he gets close to some scantily clad women, and if you’ve seen the documentary about the making of ‘The Island of Dr. Moreau’ then you know he’s quite fond of the ladies.

The acting is atrocious in places, but if you’re a fan of trashy movies then that really won’t be an issue to you. These sort of horror movies have never really attempted to wow you with their acting, preferring to throw blood and naked women in your direction instead and hope that it keeps your attention. Fans of cheap Italian horror will find a lot to like here, and David Warbeck is always good value. The supporting cast are not the best, but they make do.

Shameless Screen Entertainment have released the movie uncut for the first time ever in the U.K, and the film is presented in 16.9 anamorphic widescreen. The film is available to purchase now directly from the Shameless website via the following link:

I’d like to thank Shameless for providing me with the movie for review. 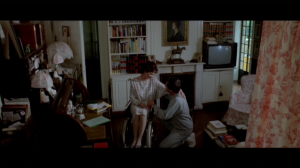 Joanna (Christina Nagy) is a wealthy philanthropist who was confined to a wheelchair after suffering an attack at the hands of a psychotic person dressed as a priest when she was a girl. She spends most of her time at her centre for paraplegics which she owns. She meets a handsome trainer at the centre called Craig (David Warbeck) and they enter into a whirlwind romance, where Craig proposes.

Craig however has other plans, which is actually touched on very early on in the movie. His intention is to scare Joanna to death so that he can get his hand on her money, and he is prepared to gruesomely dispatch anyone that should get in his way. Though Craig’s motive is revealed quite early on, there is still plenty of suspense and some fantastically bloodthirsty deaths. For some strange reason David Warbeck’s voice has been dubbed over by some random American actor, which is sad as I really like David’s voice. However it does nothing to really dampen the film, which is right up there with some of the other well known giallo’s.

The camera work is done really well, with some great POV shots. I love that it uses some of the music from The New York Ripper, and has usual giallo nods like the killer wearing black leather gloves. It’s also refreshing to see David Warbeck play the villain, and he does so with oozes of charisma. I must say Shameless Films have done a wonderful job in terms of restoration on what was long feared to be a lost movie. 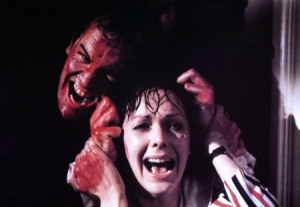 There supporting roles are filled quite admirably, but this film really belongs to David Warbeck and Christina Nagy, who really get into their roles and deliver some fantastic performances. This copy of Formula for a Murder was provided by the wonderfully generous folks over at http://www.shameless-films.com. The movie is now available to buy and you can do so directly from the Shameless Films website. Its’ well worth getting a copy which also comes with your very own yellow mac, should you decide to go on a murderous spree of your own….I jest of course. 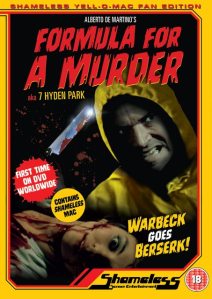