Since it’s Christmas I think it’s only right that I review a few crimbo movies. So to kick us off this month we have, my favourite Christmas movie, ‘Scrooged’. It’s basically a retelling of the classic Charles Dickens story A Christmas Carol. Frank Cross (Bill Murray) is the a head of a TV network which is soon to show a live version of A Christmas Carol. However Frank is not a fan of Christmas as it really doesn’t hold good memories for him. One night he is visited by his old, long dead boss who tells Frank that he’ll be visited by three ghosts in order for him to change the error of his ways.

Frank used to be happy. However somewhere along the way he became consumed by work and completely miserable. He had a great girlfriend called Claire (Karen Allen), and things seemed fine. However that was a long time ago and now he’s a sour, hateful man. The first ghost to help Frank see where he went wrong is the Ghost of Christmas Past (David Johansen), an alcoholic, chain smoking cab driver. The ghost takes Frank back to when he was a small child, however all it does is remind Frank of how much he hates Christmas. The ghost then takes Frank to the time he met Claire, which slightly improves things, but not enough to change Frank.

The next opportunity falls to the Ghost of Christmas Present (Carol Kane). She shows Frank all the people he is making miserable now, trying to somehow shake Frank into changing. This ghost is batshit crazy. She pokes, prods and punches the shit out of Frank all whilst giggling manically. I could go on and tell you the rest of what happens, but pretty much everyone knows the Scrooge story.

Everyone is on top form. Bill Murray is fantastic as the sour faced, cynical Frank Cross. Carol Kane and David Johansen are brilliant as the ghosts. You have excellent supporting roles from great actors like John Glover, Robert Mitchum, John Forsythe, Alfre Woodard and even Bobcat Goldthwait as the screechy voiced Elliot Loudermilk. I do love this film, with it definitely being my favourite Christmas movie. I always try to squeeze it in at least once a year. I’m sure many have seen it, however if you haven’t then give it a go. 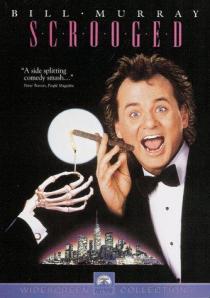