New York, 1955. Harry Angel (Mickey Rourke) is hired by a mysterious businessman named Louis Cypher (Robert De Niro) to find a man named Johnny Favourite who reneged on a deal that he had with Cypher. Apparently Johnny Favourite has been missing for quite some time and Mr. Cypher is eager to find him and collect on his payment.

Angel’s investigation takes him to the deep south where Voodoo is rife. There he meets a young lady called Epiphany Proudfoot (Lisa Bonet), who was Johnny Favourite’s daughter. She too says she hasn’t seen Johnny in years. As Harry Angel digs deeper, things begin to turn a lot more sinister, as Johnny Favourite’s old associates want him dead, and some of them are turning up dead themselves. To say any more would spoil the story. The whole film has a sense of foreboding running throughout it, and you fear for how things will turn out.

This film is directed by the brilliant Alan Parker, who also did Bugsy Malone and one of my favourites, The Commitments. He brings a wonderful outsiders view to the city of New York, and later on in the deep south. Everything is shot with saturated colour, with just the smallest glimmer of light shining through. The script is brilliant and everyone is on top form. De Niro as Louis Cypher (Lucifer, geddit?) is menacing, I mean…really. Rourke is great as Harry Angel and shows how good he can be when his heart is really in it.

I have seen this film many times, and each time it still grips me. I remember reading that Bill Cosby lost his shit at Lisa Bonet when he saw this movie as she was doing The Cosby Show not long before. It really is worth a watch, I definitely recommend it. 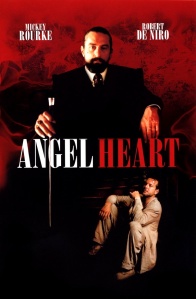