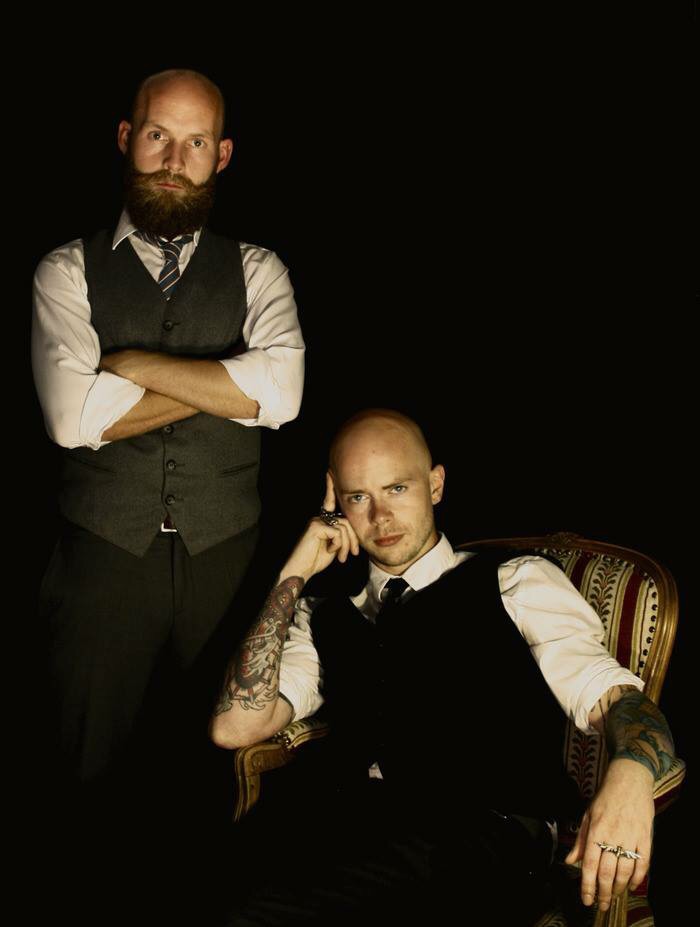 The american horror publisher Evil Jester just launched the Indie-go-go campaign (link here: https://www.indiegogo.com/projects/made-flesh) for their upcoming graphic novel “MADE FLESH”, an ambitious, 124-page horror story all in color. The creators of the book are a writer/artist team from Denmark of all places.

I/WE (?) Horror caught up with the two up-and-coming talents for a quick chat about “Made Flesh” and to figure out why an American publisher believes  these guys will be succesful “over there”:

JM: Lars and Tom, can you introduce yourself to our readers?

L: Sure. I’m Lars and I’m the writer of “Made Flesh”.I’d like to say thanks for talking to us. This whole crazy journey we’re on is all about the art we make, the fans and friends we meet. It’s so great to feel that people support what you’re doing and now that we have the indie-go-go campaign up and running it really means everything.

T: My name is Tom Kristensen. I’m a 32 years old freelance illustrator living in Copenhagen with my lovely girlfriend. I generally work with visual storytelling and try to incorporate the comic book medium in everthing I work on.

JM: Can you tell us a bit about what readers can expect from “Made Flesh”?

L: Well, on the surface level it’s a haunted house story about a guy named Michael whose father dies, so he has to travel back to his childhood home with his girlfriend to settle the estate. Already from the beginning Michael is having some problems, he has nightmares and hallucinates. We sense that there is something dark in his past and it is actually threatening his relationship. Of course the past comes back to haunt him – both metaphorically and quite literally, and he has to dig it all up to save himself and his girlfriend. I don’t want to give much more away, but people who are interested should follow the group on Facebook as well as the indiegogo campaign cause we will be posting new material and little bits of extras all through the next thirty days.

Both Tom and I are very ambitious about our art, be it writing or drawing, and when we made “Made Flesh” we comitted to create something genuine and genuinely scary. To be honest, I didn’t know if anyone was going to want to read it, so at some point I just said – fuck it, let’s go all the way. No compromises. Let’s give them hell. So we did – and it paid off. This book is our vision – surreal, visceral, psychological, litterary and artistic, creepy and disgusting.

T: In regards of the visual experience I wanted Made Flesh to have a strong visual side that would fit the psychological aspects of the story. Things aren’t so clean shaven in the tale so I took the drawings down the rabbit’s hole as well. I decided to approach the artwork with a more of a illustrative feel instead of trying to have everything perfectly inked. The pencils give a lot of nice textures that help setting the mood for this spooky tale

JM: Obviously, you are both hugely into horror entertainment, but what can a graphic novel offer in terms of horror that is different from a novel or a film and how did you make “Made Flesh” scary?

T: I think comics and graphic novels have a huge potential when it comes to tell deep compelling stories. The way graphic novels demands cooperation from the reader. You need to be willing to merge yourself with the artwork and text in order for you to get the full experience. A lot of the story happens in-between panels and the reader needs to make it happen in his og her mind. That is one of the great things about the medium. A picture can hit a lot faster than a page full of words and that’s one of the things that make graphic novels suited for horror. You decide what the reader will see and what she’ll imagine. That’s pretty powerful, if you ask me. You can’t really create shock effects in a physical book unless it’s some sort of crazy popup book (I’d buy it!). So you need to take it in another direction. A much more interesting direction I might add. You need to create real emotions in your characters. They need to feel real in order for the scary things that might happen to them feel real to the reader. You want to work a lot with ambiance and atmosphere.

JM: For a lot of writers and artists in comics it can be quite a challenge to find the right people to collaborate with. How did your working together come about? Did you meet a convention, online or somewhere else entirely?

T: I wanted to create a graphic novel for my master’s degree at the design school. and I had met Lars at the Animation Workshop’s artists in residency Open Workshop earlier that year. I knew he wanted to write and I needed a story to work with so I asked him if he wanted to write it. Luckily he said yes. After I graduated we decided to finish the book. We’re both very committed to making art and stories so it felt only natural to collaborate.

JM: Like many other up and coming comic book writers and artists, you went the self-publishing way before being picked up by a publisher. How did you go about that? Is it something you will recommend to others?

L: We definetely went the DIY-way and to be honest, we worked our asses off. I have always related what we do to punk bands who do everything themselves and sleep on their friends couches when they go touring. I basically spent all my money on self-publishing Made Flesh, and had to go on the dole for a month afterwards. Tom and I would ride our bikes around Copenhagen to get stores to sell our book, and we stood behind our own table at conventions in Denmark, Germany and the UK selling the book. There really is no easy way to do something like this. It’s hard work, but it’s also extremely rewarding because you’re doing what matters to you, and you live life as if it actually mattered – you’re not cheesing it. I recommend doing it this way, because the best way to learn something is by actually fucking doing it. You know, Tom and I both have  creative educations, but I still say I my real education was all that time I spent making underground comics, writing and drawing for myself. It teaches you the craft, self-discipline and dedication.

JM: Obviously, getting published is a big deal for all writers and artists. How did you get picked up by Evil Jester?

L: Yeah, it’s like, all that hard work and dedication I talked about has paid off, you know? Because first we got published in Denmark. Then we won the award for best Danish horror publication in 2013. Now we’re ready to bring our vision of horror and madness to an even bigger audience. I had already been writing a bit with the editor Charles Day about doing something for them because I knew they were doing awesome stuff, and when we eventually submitted the book to them they pretty much accepted it right away.

Q: So you made the book – and now you want to do it again!? Or what is the deal with the indie-go-go campaign and why should the readers donate their hard-earned money to it?

L: The thing is, getting pubslihed in the US doesn’t automatically mean you hang out with Stan Lee and get a big bag of money handed to you. Evil Jester is a small company – they’re a quality publisher, but they’re small. And printing a big, full color comic book is expensive. And that’s not even taking something like marketing into consideration, which is a big part of it too. Obviously we’re not putting this money in our pockets – we’re trying to raise enough that we can publish a really, really, cool version of Made Flesh, hopefully a hardcover. That’s why people should support us if they’re into indie horror and good comics because we put our blood, sweat and tears into this. It’s not some Sunday school trip – we really love horror and we really, really worked hard to create something special here.We also want to make even more books, so if you guys help us here now, we promise you we’re going to deliver on the goods.

JM: Before starting Made Flesh, was there anything that really inspired you and helped in the creative process?

L: Well, for my part, I had just graduated from animation school and had gotten my bachelor, but I knew I wasn’t going to work with animation. I started to do comics again, but then I just gravitated towards writing more and more. That’s like the context, but to answer your question I would say that someone like Grant Morrison inspired me a lot, because he really opened my eyes to how much you can do with comics. For me, he made comics sexy and rellevant. It was like, when I was reading his books, I would think – yeah, this is the kind of thing I want to do. Like Arkham Asylum which was a huge influence on MF.

T: Yes, I’d done a 112 page danish comic called Deadboy so I knew that I could actually finish a longer story. A lot of the time in the creative process you really just need to believe you can do it. During the time of drawing Made Flesh I went to the library a lot to read comics. I take a lot of inspiration from looking at other comics and say to myself: It they can so can I.

JM: Preacher would also be something that has great writing and isn’t afraid to be daring.

L: Totally! I have like four books that are the hallmark as far as I am concerned, Sandman, Preaher, Hellblazer and The Invisibles. For me, those four books, that time at Vertigo, was the best in horror comics.

JM: That’s what I liked about Made Flesh. It was very daring but treats the reader with respect. I love mature stories like that.

L: Yeah absolutely, I try to make something that I would like to read. I’m really satisfied with all the layers in the story, and how it doesn’t get spelled out, but you get the feeling of a world and a cosmology with spirits and demons even though you are never told exactly how it all works.

JM: Guys thanks so much for your time. Good luck with the book and the campaign.