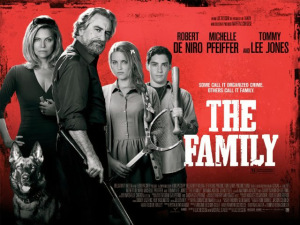 The Manzoni family, very much a New York mafia family, are forced to constantly relocate under a witness protection programme after the head of the family (De Niro) snitched on his fellow gangsters. Their latest home is in a sleepy town in Normandy, and despite being under the watchful eye of agent Robert Stansfield (Jones); they cannot avoid their old habits and particular methods of justice on unsuspecting locals. This is why they are constantly being moved, but this time their actions may just finally reveal their cover to those that want to kill them.

I know Tommy Lee Jones has made a career of playing miserable characters, but in the case of his performance in The Family I am not sure he is even acting. It is most definitely a feeling I shared with Agent Kay as