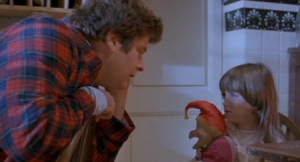 When little Judy Bower (Carrie Lorraine), her father David (Ian Patrick Williams) and step-mother Rosemary (Carolyn Purdy-Gordon) become stranded in a storm after their car gets stuck in the mud, they seek solace in a nearby mansion. The owners of the mansion, doll maker Gabriel Hartwicke (Guy Rolfe) and his wife Hilary (Hilary Mason) tell the family they are more than welcome to stay the night until the storm passes. Suddenly another group of people burst into the house from the storm. Ralph Morris (Stephen Lee) and the two hitch-hikers he picked up, Isabel (Bunty Bailey) and Enid (Cassie Stuart) are also told they are welcome to stay the night.

Gabriel tells Judy of the elves that also live inside the house, telling her they are not to be feared as they like to play with children. Judy, who has a vivid imagination listens intently. But as the night goes on Ralph and Judy begin to see that Gabriel is not lying, and that those who would seek to to bad things, will suffer the wrath of the dolls. 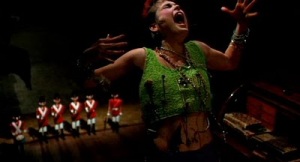 Directed by Stuart Gordon (Re-Animator) this film moves along at a fairly brisk pace. It’s also not the longest of films, clocking in at just 77mins. Stephen Lee who plays Ralph does so with a real childlike innocence, which when you see the movie was most probably the point. He brings charm to the role and it’s a shame he doesn’t do more mainstream work. The two hitch-hikers Enid and Isabel are woefully acted, so it’s not exactly surprising that the two actresses in question never made more than 5 films between them. Their English accents are atrocious and one would think they learned their accents at the Dick Van Dyke School of Linguistics.

The SFX of the dolls is actually quite impressive and almost comical at times. There are moments when you see the dolls discussing something that really made me laugh. I think special mention should also go to 101 Films who have done a sublime transfer for the blu ray. Sadly the release is devoid of extras, but is still very much recommended and worth picking up for fans of 80’s horror. This copy of Dolls was graciously provided by the kind folks over at http://www.101-films.com, and is available now from all good stockists.