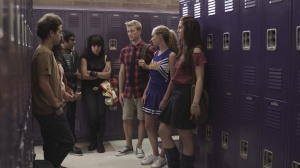 A group of freshman students try to attend the homecoming dance, but are turned away by seniors. However it’s all part of the plan of one freshman, Billy Corbin (Jesse Ferraro) who is looking to have sex with another student. However Billy’s plan goes awry when he is locked in a cupboard and tragically killed in a fire. Fast forward three years, and the group of freshman students are now seniors who will be attending their own homecoming dance. 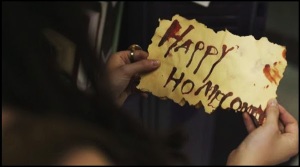 However the students begin to receive ominous notes that appear to be written in blood. And now a mysterious figure in a fireman’s suit is stalking the halls looking for retribution over the death of Billy Corbin. Now the students are being picked off one by one and must try to survive their ‘Bloody Homecoming’.

Some films contain acting and script that is so cringe inducing that you laugh whilst watching it, and actually kind of like. Not so here. This film is just plain bad. The acting is the sort that you would see in a school play, just shy of a nod and a wink at the camera. The script is just as bad and only serves in highlighting the banality of the story itself. It’s a ‘slasher’ movie that can’t even get the slasher point right. There were numerous (very bad) attempts at building and generating suspense, which completely backfired. Even the cheap scares that many inferior films use as a crutch, fail to elicit even a mild scream here. None of the characters are in any way sympathetic, and you really feel no connection to them whatsoever. Making their obvious fates seem like a blessing.

The production values are not too bad on something that is very clearly low budget. However it can’t save what in my opinion is a terrible movie. The actors, whenever on screen, rush their lines, wearing smiles that make it seem like they can’t believe they’re in a movie. They do nothing to draw you in, making the run time of 81mins seem like an eternity. I will mostly refrain from telling people to steer clear of a movie, instead leaving my rating at the bottom as guidance. I prefer that you watch the film yourself, and come to your own conclusions. We all like different things, and this may very well be someone else’s cup of tea. It’s clear what I think of it, so give it a watch guys and drop a comment on your thoughts once you’ve seen it. Look forward to some great discussions. 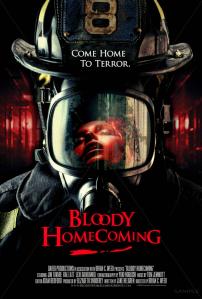