When Dan (James Tupper) is asked to become the new pastor of a small town, he hauls his family half way across the country to take on his new role. Together with his wife Wendy (Anne Heche), two daughters Rebecca (Rebekah Brandes) and Mary (Jennifer Stone) and their son Christopher (Carter Cabassa) they arrive in their new home town to start a new life. There they are welcomed by the retiring Pastor Kingsman (Clancy Brown), who is helping them move into their new house and settle in.

However all is not as it appears. The town and the people seem almost too perfect. When Rebecca begins to have terrifying visions, she begins to think something sinister is lurking in the town. Slowly the real reason Pastor Dan and his family have been brought to town is revealed, and nobody is safe. 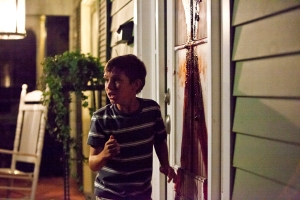 What first drew me to this film was the fact that it was produced by Slash from Guns ‘n’ Roses. That in itself was reason enough for me to get this film and give it a whirl. And for the most part it doesn’t disappoint. Yes it takes a little while to gather steam, but once it does get going you are left with a solidly entertaining chiller. That being said Anne Heche is completely wasted in her role. Yes it’s been a while since I’ve seen her in anything but I always thought she was a good actress and her talent goes untapped here.

Clancy Brown is always watchable in whatever he’s in. Here as Pastor Kingsman he plays the role with restraint, but with flecks of menace bubbling below the surface. The story is very bleak and it stays that way till the denouement. I think you’ll find yourself very surprised at what this film has to offer. If this is Slash’s first attempt at producing a horror movie, then I for one am very intrigued to see what he comes up with next. This film was provided by the kind folks over at http://www.fetch.fm. It is available to buy now from all good stockists.