Robert Altman brings Raymond Chandler’s private eye to life in this brilliant 70’s noir. Philip Marlowe (Elliot Gould) is a smart mouthed private detective in Los Angeles. He is asked by his friend Terry Lennox (Jim Bouton) to drive him down to Mexico as there are people looking for him. As Terry is Philip’s friend he does as he’s asked. However when Philip returns home, he is arrested for aiding and abetting a murderer, as Terry has been accused of murdering his wife. Philip is released from prison days later as Terry’s body is discovered in Mexico in an apparent suicide.

Marlowe is then hired by the beautiful Eileen Wade (Nina van Pallandt) to find her violent alcoholic husband Roger Wade (Sterling Hayden). Then to add to Marlowe’s problems he is strong armed by a man named Marty Augustine (Mark Rydell), who seems to think Marlowe knows where his missing $350,000 dollars are. Marty said Terry had the money, and that Marlowe was the last one to see Terry, so it stands to reason that he knows where the money is. Needless to say that there is more going on than it first appears. Leading to a startling revelation and a few close calls.

Elliot Gould absolutely steals the show as Philip Marlowe. He is mesmerising in the role, delivering his lines with a smirk on his face and a glint in his eye, he really is fantastic. The supporting cast are great too. Sterling Hayden is his usual gruff self as Roger Wade, the writer with a few demons of his own. Nina van Pallandt is great as Eileen Wade and is stunningly beautiful to boot. Mark Rydell is menacing and funny all at the same time as Marty Augustine, really getting into his role. There is also a very small cameo for a young Arnold Schwarzenegger as one of Augustine’s henchmen.

This copy of The Long Goodbye was provided by the gracious folks over at http://www.arrowfilms.co.uk. You can head over to their site and pick up a copy of this wonderful film now. The transfer is second to none. Arrow always bring out the best in films, and never deliver anything short of extraordinary, and they don’t put a foot wrong with this release either. It is well worth a watch for those who like a good private eye story just like the good old days. Enjoy! 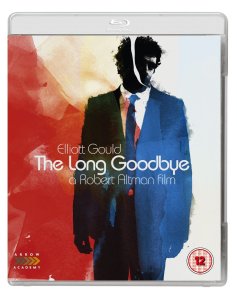