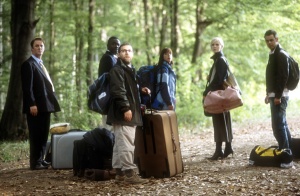 A group of work colleagues from a weapons company called Palisade Defence, are on a team building exercise in Eastern Europe. After the bus drops them off due to the road being blocked, the group decide to walk the rest of the way to the house they’ll be staying at during their trip. However they go to the old house that was used for the employees, and not the new one that they’re boss is waiting at. When they get there, the house is empty and covered in dust and mold. The group begin to settle in and explore the house.

Things however begin to take a sinister turn, as the group realises that there is someone else out in the woods that is watching them. As they explore the house, they find that the company they work for were involved in some very dubious experiments many years before. Now the people that were experimented on want their revenge, and will do anything possible to see the whole group decimated.

I must say I really like this movie. For me it’s Danny Dyer’s best role. Okay I know that’s not saying much but he really gives a good performance and has some hilarious lines. He’s brave when he needs to be and is consistently funny throughout. The supporting cast are great too. Laura Harris plays Maggie, who is great in the role. You also have Tim McInnerny, Toby Stephens, Andy Nyman, who all really get into their roles.

The action is really well put together, and there is some great gore. There are also some really funny moments, including one where Andy Nyman’s character Gordon, bakes a pie he “found” in a cupboard. I think if there are people out there that haven’t seen this film, then I highly recommend it as it’s well worth watching.