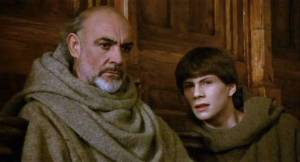 William of Baskerville (Sean Connery) and his young apprentice Adso of Melk (Christian Slater) are called to an isolated abbey in the north of Italy, to investigate the mysterious death of a monk. William is greeted by the Abbot (Michael Lonsdale) and taken to the point where the body was said to have died. William investigates the death and attributes it to suicide. He is set to leave when another monk is found dead, however in circumstances which make it seem like foul play was involved. 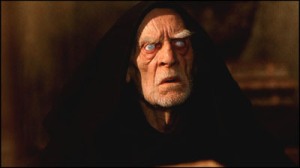 When the body of the victim is checked over, it shows that he has black finger tips and a black tongue. William becomes suspicious as he believes monks are being poisoned to protect a secret the abbey has kept for years. As the bodies begin to pile up, a group of inquisitor monks are called in to investigate claims of heresy, led by Bernado Gui (F. Murray Abraham). Bernado and William once worked together, but became enemies when Bernado tried to have William executed.

William’s investigation takes him to the labyrinthine catacombs of the abbey, where all of the books are hidden. William believes that it’s man that is committing these killings, and not the work of the Devil as Bernado Gui would try to have others believe. However because William refuses to believe that it’s the work of the Devil, he too becomes a target of the inquisition, resulting in a race against time to save himself and others from being burned at the stake. 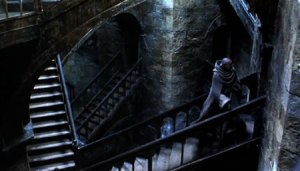 I dig this movie. I love how bleak and desolate the landscape is, almost giving it a post-apocalyptic feel to the movie. Sean Connery is always worth watching in my opinion. He brings a real sense of intellect to the role, really drawing you into his world of somebody that really knows their shit. There are a lot of familiar faces on show here, even Ron Perlman who plays a mentally handicapped man living outside the abbey. Christian Slater is good enough in one of his early roles, although everyone pretty much plays second fiddle to Sean Connery who is just mesmerising. F. Murray Abraham is great as Bernado Gui, and really shows just how terrifying religion was back in the old days. Give it a watch.