Okay, before I start this review let me just get a few things out of the way. Things that concern this movie and others like it. I like low brow comedies like this, I make no apologies for that. Unlike popular magazines like Empire and Total Film, I do not seek to appeal to the masses in giving massive thumbs up to Lord of the Rings (which I personally hate) or berating movies like this. I love this movie, it makes me laugh and that’s all I ask for, a film that entertains. Yes it’s puerile and immature, but it never sets out to be anything other than that, so why it gets such shit is beyond me. These movies are made for a select audience. For example movie snobs that would sit and watch Michael Haneke movies all day would have no interest in this movie, and that’s ok. I have no interest in Michael Haneke movies, except Funny Games which is pretty fucked up. So ease off Bio-Dome, enjoy it for the puerile comedy it is, because that’s all it’s trying to be. Okay, rant over. Bio-Dome sees two stoner buddies Bud (Pauly Shore) and Doyle (Stephen Baldwin) trying to get out of helping their girlfriends pick up litter. After they are found out they try and make it up to them with disastrous results. Whilst driving home Doyle decides he needs the toilet. The two guys drive past what they think is a shopping mall. In fact it’s a bio-dome which is to be sealed for a year to see the effect on plant and animal life. A group of scientists, led by Dr. Noah Faulkner (William Atherton) will be locked inside. Whilst the scientists are waving to the press, Bud and Doyle appear behind them also waving. As the doors have been sealed Bud and Doyle realise they are also stuck inside for the year.

Bud and Doyle waste no time in causing absolute havoc inside the dome. They don’t respect the scientists work and eat the vegtables, take baths in filtration tanks and even accidentally release a collection of rare butterflies. Their girlfriends think Bud and Doyle are great and that they meant to be part of the team, not realising the mistake. Dr. Faulkner is driven close to insanity at the antics of Bud and Doyle and retreats off into the dome. Bud and Doyle realise they can’t constantly fool around and look for ways to help the scientists out. 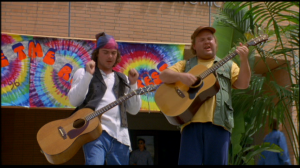 This film has a lots going for it. For starters, as seen in the picture above, it has an appearance by Tenacious D (awesome!), it also has two hot ass scientists, one played by Kylie Minogue who is almost always in the tiniest pair of shorts (also awesome!). The supporting cast all join in the fun and seem to be having a laugh. 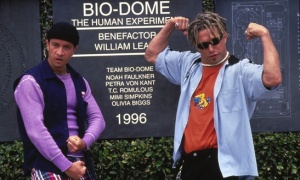 I remember reading that Alec Baldwin had advised Stephen Baldwin from appearing in this movie, saying it’d be a massive mistake. I call bullshit on that. Firstly because let’s face it Stephen Baldwin has made a career in direct to video guff and has never really aspired to reach anything further, so this wouldn’t hurt his career. Secondly Alec Baldwin is obviously not a fan of this sort of humour judging from that statement so he probably would say that. This is the perfect movie to watch with a few mates and a few beers. Don’t let the metacritic or imdb score sway you. Watch it for yourself and make your own mind up. I did and I loved it. Get on it!