Gino Felino (Steven Seagal) is a no nonsense New York cop. When his partner Bobby Lupo (Joe Spataro) is gunned down in front of his wife and kids, Gino begins the hunt for the killer. He finds out that the killer is a someone he used to hang around with when they were kids, a man called Richie Madano (William Forsythe). Richie has become a drug crazed murderer, hell bent on causing as much destruction as possible before going out with a bang.

Both the mafia and the police begin a hunt for Richie, however Gino is hell-bent on finding Richie first and dealing with him his own way. Gino scours every lowlife haunt that Richie could be, including a dingy bar owned by Richie’s younger brother, Vinnie Madano (Anthony DeSando). Gino terrorises the clientèle, including mafia members and drug dealers, getting into fights along the way, both with Richie’s men and other lowlife.

Gino continues his hunt for Richie even going as far as threatening Richie’s elderly parents. However Gino finds out that there was more to the murder of Bobby Lupo than a simple murder. All culminating in a brutal and bloody showdown with Richie and his men.

I love Steven Seagal’s earlier stuff. I find that he was doing some decent stuff right up until Glimmer Man. Then he started to believe his own hype and churn out direct to video shit where he is only shot from the waist up so you don’t see his massive gut. The guy has definitely not grown old gracefully. I mean even in Nico/Above the Law he was going bald, with a hairline like someone had his hair in a buggers grip. But watching this you remember a time when he was the ultimate bad ass, kicking seven shades out of random scum. Now he just fat, slow and a bit weird….with hair plugs. Shame really. 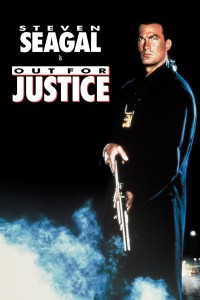