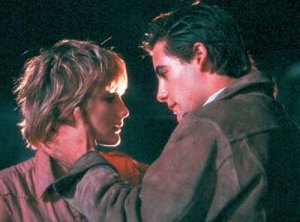 Caleb Colton (Adrian Pasdar) is a young man living in a small farm town meets and falls for a young woman named Mae (Jenny Wright). While they are kissing Mae bites Caleb but can’t bring herself to feed from him. She decides to make Caleb like her, telling him that if he wants to survive then he needs to kill. She brings Caleb back to her group led by Jesse (Lance Henriksen). Jesse tells Mae that if she wants Caleb to stay and become like one of them then he needs to kill someone and feed.

No matter how much Caleb hungers for blood he can’t bring himself to kill, even as he begins to grow weaker and weaker. Mae tells him that if he doesn’t feed he’ll die from hunger, or Jesse and the rest of the gang will kill him. One of the other members called Severen (Bill Paxton) constantly teases and messes with Caleb, fighting the urge to kill him as he doesn’t believe Caleb can be like them.

Caleb is told by Jesse that there will be no more delays, he makes a kill and proves himself or dies. Caleb still can’t do it. However things get worse when Jesse and Co. turn on Caleb’s family, leaving Mae as the only one who can help Caleb. All working it’s way towards a bloody and fiery end. A lot of folk say this doesn’t really count as a ‘vampire’ film. I kind of get that as a lot of it is left vague. You never see if they cast reflections or not, or if garlic or crosses affect them. You do however see that they survive on blood and can be killed by sunlight.

Directed by Kathryn Bigelow this is one of the best vampire films out there. It plays out more like a western, with flashes of violence lighting up the screen. It’s a raw and unflinching action horror with a fantastic cast. It has a lot of faces in the supporting cast that many will recognise. I really enjoy it and I’m sure many others will too.