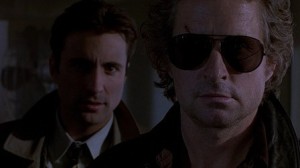 God I love this movie! One of Ridley Scott’s most underrated movies in my opinion. Nick Conklin (Michael Douglas) is a cop in New York City who is under investigation from Internal Affairs for his part in a bust where drug money went missing. Nick and his partner Charlie Vincent (Andy Garcia) are in a cafe when some Japanese men enter and begin to hassle some mafia members. One of them, Sato (Yusaku Matsuda), steals a wooden box and kills the men. Nick and Charlie give pursuit to Sato and his men. Nick manages to catch up to Sato and over powers him.

Nick is told that Sato is wanted in Tokyo and that he is to be brought back immediately. Nick tells his superiors that he wants to be the one to bring Sato back and that Charlie is to accompany him. Nick, Charlie and Sato reach Tokyo where they are met by a group of policemen who have been ordered to collect Sato. Nick and Charlie hand Sato over and begin to get off the plane. Another group of policemen show up and say they are there to collect Sato, Nick realises that he’s been duped and gives chase. After losing Sato, Nick tells the chief of the police in Tokyo that he wants to retrieve Sato. Nick is told that he is not a Japanese policeman and that it will be left to Masahiro (Ken Takakura), a detective in the Tokyo police force, to catch Sato.

Not willing to accept to simply be an idle bystander, Nick teams up with Masa and they both work together to catch Sato. Also helping them is an American working girl in Japan called Joyce (Kate Capshaw). As the case goes on, things happen that cause it to be more personal to Nick, giving him a chance at redemption.

I really do love this movie. Tokyo looks like such a brilliantly vibrant city, I would love to visit one day. Everybody is on top form. Michael Douglas is brilliant as Nick, Andy Garcia brings a level head as Charlie and Ken Takakura is fantastic as the honourable Masa. However Kate Capshaw feels wasted in her role as Joyce, not really contributing anything to the story that I felt was needed. Yusaku Matsuda is menacing as Sato, bringing a real intensity to the role. Sadly he was dying of cancer during the making of this movie. Definitely worth a watch if you dig 80’s action with a kick ass synthy score.