I like the first Halloween movie. What some people don’t seem to understand about this series is that John Carpenter never intended for Michael Myers to be the common denominator. The series was supposed to be a series of ghost stories/urban legends. The first being the babysitter being home alone. However Carpenter never banked on how popular Myers would become with the movie going public. And so the franchise was born, or so folks believed. In an effort to steer the series back to his original vision, Carpenter produced this horror gem about an evil toymaker hell-bent on killing the children of America. He dared to be different and I am so glad he did. 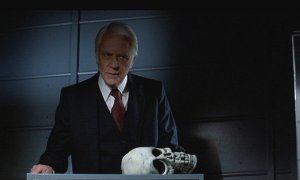 Tom Atkins plays Dr. Dan Challis who stumbles across the plot to kill the kids using masks that have a something hidden in them that will be activated on October 31st. Dan meets the daughter of a man who was admitted to hospital clutching a mask saying “They’re going to kill us!”. The daughter’s name is Ellie Gimbridge (Stacey Nelkin), she says that her dad ran a shop that was selling masks that had come from a factory called Silver Shamrock. The company is owned by Conal Cochran (Dan O’Herlihy). Cochran is carrying on an ancient Celtic tradition of ritual sacrifice, using the masks to carry out his nefarious plans. 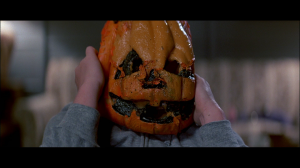 Dan and Ellie uncover Cochran’s evil plan and work together to try and put a stop to it. Like I said earlier, this is a movie that dared to be different and I think it succeeds. I hate that the Halloween movies focus on Myers as the later movies start to feel like carbon copies of each other. This film on the other hand is a breath of fresh air and is supported by a genuinely scary story where everyone is on top form. 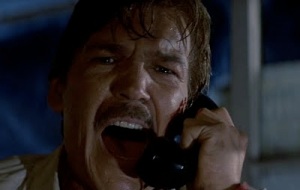 This is a film I always try to watch at least once a year. It really is great fun and doesn’t lose the scare factor even after repeated viewings. Folks who know cult movies know the brilliance that is Tom Atkins and he is on top form. This is a guy who brings his A game whatever film he’s in. Even in Lethal Weapon which he’s in for no time at all. Dan O’Herlihy is great as Cochran. He basically plays the same gruff character he played in Robocop, but it’s still cool. There is some great gore and hot damn is that Silver Shamrock jingle catchy as hell! Enjoy. 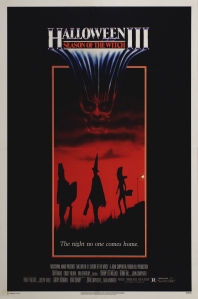