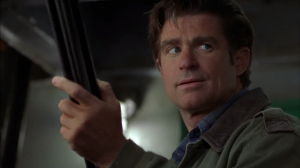 “Full scream ahead” says the tagline. Well what a scream this film is. This is one of those brilliant, schlocky, B-movie type deals. The cast is not A-list whatsoever, but everyone is on such top form that it scarcely matters. Directed by Stephen Sommers (The Mummy), Deep Rising is perfect friday night fodder for you and a few mates. It all begins with John Finnegan (Treat Williams) who is the captain of a small boat. He has been hired by a group of mercenaries led by Hanover (Wes Studi) to take them to a cruise ship in the middle of the ocean which Finnegan realises Hanover and his goons want to rob. On board the cruise ship is a thief by the name of Triilian St. James (Famke Janssen) who is trying to raid the vault and ends up trapped.

It’s not long before Finnegan and Hanover realise that something has made it’s home on the ship already when they get aboard to find the place in ruins. The group find that some sort of creature is aboard the ship and is feasting on the passengers. Leaving Finnegan and his crew battling the creature and Hanover’s mercenaries.

This film has lots going for it. For a film that is 15yrs old, the CGI is mightily impressive. Hell I’d even go so far to say it trumps some CGI in today’s movies. The supporting cast is great too. Kevin J. O’Connor is great as Joey, a member of Finnegan’s crew. You have great actors like Jason Flemyng and Djimon Hounsou playing mercenaries. You also have the wonderful Anthony Heald, so adept at playing slimy characters, as the cruise ships owner Simon Canton, who knows more than he’s letting on. Also the gore is pretty gnarly too. I shit you not. For a 15’s movie it’s pretty full on. The creature has some sort of stomach acid that helps it digest the passengers, so when one is spat up you see what the effect is. 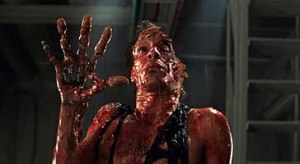 I thoroughly enjoyed this. I stumbled across it ages ago and it still holds a place in my DVD collection today. Such a great movie that’ll go nicely with a few beers and a nice pizza. If you haven’t seen it then seek it out. I’d love to hear your thoughts in the comments below too. Enjoy.