Some films are so endearingly shit, that it’s hard to completely hate them. The live action version of Fist of the North Star falls into this niche category. Directed by Tony Randel (Hellraiser II), it’s a mish mash of good intentions and poor execution. I’m sure many geeks know the story, but just to refresh your memories i’ll glaze over it again. Kenshiro (Gary Daniels)  wanders the earth righting wrongs and defending the innocent. Gangs of raiders stalk desolate towns preying on the weak. Ruling this wasteland is Lord Shin (Costas Mandylor) who governs with an iron fist, living in his palace away from the harshness of the wasteland.

There are lots of things wrong with this film. First off is the total miscasting of Gary Daniels as Kenshiro, Costas Mandylor as Lord Shin, and someone I haven’t mentioned yet…Chris Penn as Jagi, renamed Jackal for some bizarre reason. The choreography is just not up to scratch at all. Any intensity that is evident in the Manga version is completely lost here. Never is this more apparent that when Kenshiro tackles some bandits and does his Hokuto Shinken multiple punch. In the Manga version he obliterates his opponents, here however it’s quite different. Gary Daniels tries his best but the end result is laughable. The bandit laughs and asks a question I think we’re all thinking, “Are you trying to tickle me to death?”.

Okay I understand that Tony Randel does what he can with the obviously small budget, but it needn’t be so glaringly obvious. Majority of the wasteland scenes look like they have been filmed on a soundstage. The costume design is good however, capturing the apocalypse look well. It’s mainly the cast and dire script that let it down. Even the supporting cast like Malcolm McDowell can’t save it from being just pretty meh. Other supporting cast members like Clint Howard, Dante Basco and Tracey Walter just go to show that the budget wasn’t the biggest. 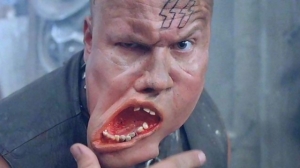 The make-up effects are brilliantly cheesy however. Particularly when Jackal removes the strapping that keeps his brain from bulging out. The whole movie is probably best viewed with mates after a night at the pub. Pick up a pizza on the way home, stick this on and just have a laugh. It’s pretty much that sort of movie.