I felt compelled to review this turd of a movie so that others may never make the mistake I did. Dear god what a car crash of a film this is. A vanity project for John Travolta, as the story it’s based on was written by the batshit crazy L. Ron Hubbard who is the man that created Scientology. Scientology for those who don’t know is the celeb religion of choice. I use the term religion loosely as they are a bunch of parasites that live only to make money and destroy the lives of those who decide to leave. Anyway my pet hate of Scientology is something to discuss another time.

How John Travolta manages to keep fucking up his career is nothing short of astonishing. He was given a lifeline from Tarantino with Pulp Fiction after making some truly horrendous films, Look Who’s Talking Now to name just one. He then followed Pulp Fiction with films like Broken Arrow and Face/Off. However seeming like a man who believes his own hype he went forward and made this utter waste of celluloid.

There are so many things wrong with this film that I barely know where to start. Never mind the fact that Terl (John Travolta) has a head shaped like a turkey’s arse and a hand full of penises. The costume design is horrendously bad. All of the alien race walk around on what look like 6inch platforms, have oversized bulges in the crotch area and look like rastafarian wannabes. The camera films at a slant for nearly 80% of the movie, and a blue lens tint is also used which does it no favours. How it took two people to write this script is beyond me. The lines being delivered are shocking, the fact that everyone is acting like it’s a school play make it ten times worse.

How Travolta convinced actors like Barry Pepper who plays the “man-animal” Jonnie Goodboy Tyler (I know) and Forest Whitaker who plays Ker, to star in this movie i’ll never know. I can understand Travolta’s wife being in it but those two guys? No, sorry. 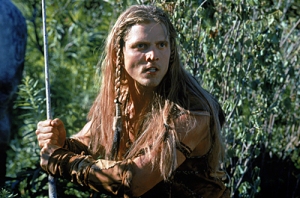 The ‘plot’, if you can call  it a plot, involves a group of aliens called ‘Psychlos’ who rule earth in the year 3000 and have done for a 1000yrs. The Psychlos have captured most of humanity which they use as slaves, the rest live on the outskirts away from Psychlo control. Jonnie Goodboy Tyler (Barry Pepper) is captured by the Psychlos and forced to mine for gold by the commander of the Psychlos Terl, played by John Travolta. Jonnie is chosen to be a foreman for the other slaves and is educated by Terl in the language and history of the Psychlos. However Jonnie escapes and organises an uprising against the Psychlos. It’s not as exciting as it sounds. Full of plot holes and terrible acting.

I don’t think I really need to say anymore, but if for whatever reason I haven’t been clear enough let me just reiterate….STAY AWAY FROM THIS MOVIE!!! However that being said, should you be curious enough to check it out be warned, you cannot un-see it. Just saying.