I’ll be straight to the point on this one. I wasn’t sold on it at all. However Roberts Blossom who plays the main character Ezra (who some may remember as the street sweeper in Home Alone) is on top form here. He gives the part his all. The story is loosely based on Ed Gein, the killer and necrophile from the 1950’s. Ezra is very attached to his mother who soon dies from illness. His mental state slowly deteriorates over a year, to the point where he digs his mother up and takes her home.

However Ezra’s mother’s body has decomposed to some extent. Ezra decides he needs flesh to repair his mother, so turns his hand to grave robbing, but it’s not long before he requires flesh from the living. The story is done almost like a reconstruction. From time to time a guy steps in to talk to the camera and gives details on Ezra. I found the whole process very jarring. There were some moments of dark comedy, but overall I just wasn’t taken with it. 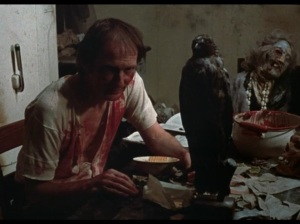 The extras are brilliant however. Callum Waddell has an interview with Scott Spiegel who recounts his memories of watching Deranged. Scott Spiegel fizzes with energy, that you just can’t help but be enthralled by his tales. There is also an interview with Laurence R Harvey (The Human Centipede 2) who talks about Ed Gein and the influence he had on cinema.

There is also a gallery of stills from the movie, an introduction and commentary from SFX artist Tom Savini and making of featurette. The package is brilliant, but the movie itself wasn’t for me. This copy of Deranged was graciously provided by the kind folks over at www.facebook.com/ArrowVid. You can order your copy from www.arrowfilms.co.uk now. 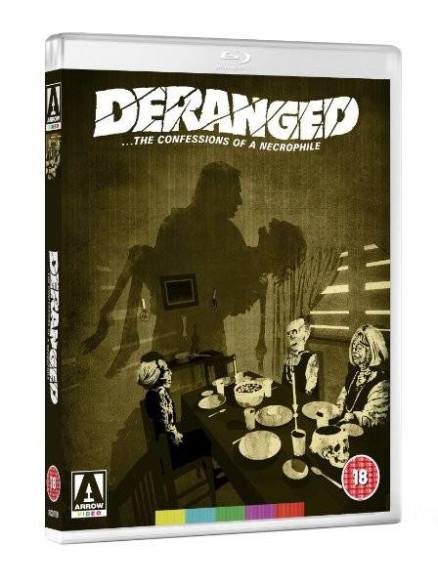